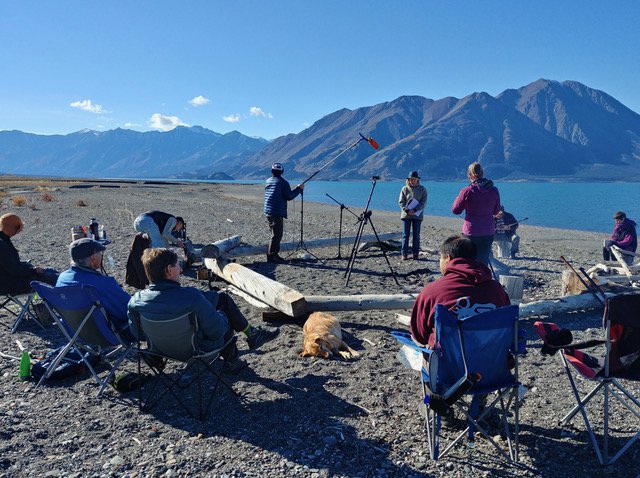 The two As the Ice Melts videos present stories and poetry on the theme of our changing environment by Yukon authors Ellen Bielawski and Joanna Lilley and Champagne and Aishihik First Nations storyteller Ron Chambers. Videos will be launched at a free online event at 6:30 pm on Thursday, January 28, 2021.

Two videos featuring Yukon word artists recorded by an all-Yukon crew on location in Kluane are to be launched at a free online event at 6:30 pm on Thursday, January 28, 2021.

The two As the Ice Melts videos present stories and poetry on the theme of our changing environment by Yukon authors Ellen Bielawski and Joanna Lilley and Champagne and Aishihik First Nations storyteller Ron Chambers.

The project is funded by a Digital Originals microgrant, an initiative set up by the Canada Council for the Arts as a response to the pandemic to help creators share work online.

In the videos, Ellen Bielawski shares fiction and nonfiction written as a response to climate change and retreating glaciers; Joanna Lilley reads poems about extinct northern species from her 2020 poetry collection, Endlings; and Ron Chambers shares stories about the land and his cultural history inspired by the two locations.

Bielawski had the idea for the As the Ice Melts project after she was inspired by two voices. “One is that of Joanna Lilley, with her remarkable Endlings poems. I wanted to hear her read them in places where extinction threatens,” Bielawski said. “The second voice is that of Champagne and Aishihik Chief Steve Smith on whose traditional lands I now live.”

Bielawski described hearing the Chief speak about the fish weir at Klukshu Village. “Chief Smith has said there used to be so many salmon that they could hear them coming. Salmon still spawn there but because of environmental changes their numbers are much reduced.”

Chambers said: “I'm pleased that the traditional name ‘kluane’ continues to exist and that it is the name of a world-class national park.” Kluane is also a name for people in Chambers’ family.

Lilley said: “I’m incredibly grateful to the Canada Council of the Arts and their Digital Original fund which enabled Ellen’s wonderful idea to become a reality, particularly at this time when opportunities to share our work and connect with audiences and creators are so diminished by the pandemic. I’m also deeply grateful to the Champagne and Aishihik First Nations, the Kluane First Nation and White River First Nation on whose Traditional Territories we were fortunate enough to record the videos. You can see from the videos how special these places are.”

Yukon filmmaker Marten Berkman also recorded the two events and is using the footage for a Virtual Reality project.

Held in September 2020 to Covid-safe standards, the two Kluane events were produced by Patti Flather and complemented by a third event at the Yukon Arts Centre in Whitehorse called Airings and Endlings and featuring readings by Bielawski and  Lilley.

The As the Ice Melts videos will be launched at a watch party on Facebook at 6:30 pm on Thursday, January 28, 2021. Visit Friends of Yukon Words on Facebook for details: https://www.facebook.com/groups/friendsofyukonwords