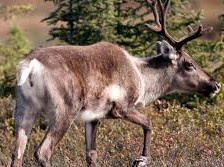 We are pleased the sale attracted little attention from major oil companies, who have recognized that drilling in this area is neither acceptable nor profitable. We believe this is a result of our collective action, as well as a lack of local support and economic viability.

Partners to the Canadian Porcupine Caribou Management Agreement came together on January 6, 2021 to respond to the recent oil and gas lease sale in the Arctic National Wildlife Refuge (ANWR). The parties are committed to advocating for protection of the Porcupine caribou herd and this vital habitat.

Together, the parties released this statement:

“Drilling in the ANWR protected areas is not sustainable for Porcupine caribou or other key species like polar bears. We are disappointed that the US government proceeded with the lease sale on Wednesday, January 6, despite significant concerns we have raised which remain unaddressed. However, we are pleased the sale attracted little attention from major oil companies, who have recognized that drilling in this area is neither acceptable nor profitable. We believe this is a result of our collective action, as well as a lack of local support and economic viability.

We will continue to work collaboratively to oppose oil and gas development in the ANWR protected areas and to protect the Porcupine caribou herd and its habitat, now and for future generations.”

"The Government of Yukon is steadfast in its opposition to oil and gas development in the Arctic National Wildlife Refuge. We are disappointed that the lease sale went ahead on January 6. Development activities in this vital habitat have the potential to harm important transboundary wildlife, and in turn, the people who rely on them. We will continue to stand in solidarity with our partners, advocating for the protection of the Porcupine caribou herd’s sacred and sensitive calving grounds on the Alaskan coastal plain." Government of Yukon Minister of Environment Pauline Frost

"The Government of Canada continues to oppose drilling in the Arctic National Wildlife Refuge due to the potential impacts on transboundary wildlife, particularly for the Porcupine caribou and the Indigenous Peoples who depend on them. Given the sale of leases yesterday generated less than 1 percent of the estimated revenue, the market has made abundantly clear that drilling in this pristine and culturally significant area is not only economically unfeasible, but environmentally and morally unacceptable." Minister of Environment and Climate Change Jonathan Wilkinson

"For 30 years, Canada has supported the Gwitchin in fighting development in ANWR, the ‘Serengeti of the North.’ On January 6, 2021, the lease sale was largely unsuccessful due in part to our collective action. Major corporations understand that their reputations would be tarnished if they participated in the development of ANWR." Member of Parliament for Yukon Larry Bagnell

"It is essential for the long-term health of the Porcupine Caribou herd that their calving grounds remain pristine. Through our unwavering opposition to development in the ANWR, Canada continues to make it clear that putting the future of this herd in jeopardy is entirely unacceptable." Member of Parliament for the Northwest Territories Michael McLeod

"Tr’ondëk Hwëch’in remains firmly opposed to any oil and gas development within the critical calving grounds of the Porcupine Caribou Herd. We are deeply disappointed with the short-sighted actions of the outgoing US Government administration, who proceeded this week to auction off oil and gas leases to portions of the Arctic National Wildlife Refuge—an area known to be critical to the well-being of the Porcupine Caribou Herd. We fear that without further intervention, this herd now faces a grave future, as do all the communities who depend on Porcupine caribou for food security and cultural well-being. In our shared role as stewards of the herd, we remain committed to advocating for the Porcupine Caribou Herd and will not rest until the 1002 lands of ANWR receive permanent protection from oil and gas development." Tr’ondëk Hwëch’in Chief Roberta Joseph

"We are disappointed in the decision to allow the lease sale to go ahead. The Gwich’in Tribal Council remains resolute in our commitment to protecting the Arctic National Wildlife Refuge (ANWR), a vital habitat for the Porcupine Caribou. Drilling for hydrocarbons in the ANWR would be devastating to Porcupine caribou and therefore our people and culture. We will continue to do everything we can to protect this sacred area alongside our many domestic and global partners. With that said, there are many other legal and regulatory avenues for us to pursue to achieve the long term protections we seek for the ANWR and the Porcupine Caribou herd." Gwich’in Tribal Council Grand Chief Ken Smith

"It was disheartening to hear the bids that had come in from those interesting in destroying our sacred lands after decades of advocacy by my Elders, after decades of sharing our knowledge and voicing our concerns and after all of the work each of our Governments have done to protect critical habitat of the Porcupine caribou herd. The Gwich’in are connected to the caribou and our fates our intertwined. The fates of these lands are not yet sealed and we will continue our work until the critical calving grounds of the Porcupine caribou herd are permanently protected." Vuntut Gwitchin First Nation Chief Dana Tizya-Tramm

"The Government of the Northwest Territories remains deeply concerned about the decision to open up development leases in the Arctic National Wildlife Refuge despite the potential of significant impacts to our shared wildlife, including Porcupine caribou and polar bears. The GNWT understands that the establishment of ANWR was itself a measure to balance wildlife and habitat needs with those of responsible development. I am hopeful the decision to remove some of the most important habitat for these species from the lease sale is a sign that our concerns are being heard as we continue to work with our co-management partners to support the subsistence harvest by Gwich’in and Inuvialuit in the NWT." Government of the Northwest Territories Minister of Environment and Natural Resources Shane Thompson