With the protests across the country in support of the Wet’suwet’en Hereditary Chiefs position on blocking the GasLink pipeline project crossing the traditional Wet’suwet’en territory.

More and more question are arising about the difference between the so called "Hereditary Chiefs" and elected Wet’suwet’en Band Councils.

Essentially, the hereditary chiefs oversee the management of traditional lands and their authority predates the imposed colonial law, which formed the elected band council.

While the Band Council is in support of the Coastal GasLink pipeline, the "Hereditary Chiefs" are not.

Problem here is that their authority predates the imposed colonial law, which formed the elected band councils.

Earlier this week, National Chief Perry Bellegarde of the Assembly of First Nations explained the situation in several televised interviews:

“In the ancestral territory lands of the Wet'suwet'en peoples, it’s the hereditary chiefs and their clans and their big houses that have the jurisdiction,” Bellegarde added. “That’s the piece that’s missing, so when Coastal GasLink and governments come in, they didn’t bring the Wet'suwet'en nation and the proper people in place to deal with their ancestral lands.”

“There’s a misunderstanding broadly of what hereditary leadership is and we’re working hard to figure that out with the Wet'suwet'en and others,” he told reporters.

WHAT ARE HEREDITARY CHIEFS?

Hereditary chiefs represent different houses and clans that make up the First Nation as a whole. Their titles are passed down through generations and predate colonization.

WHAT ARE ELECTED BAND COUNCILS?

The "Elected Band Councils" -- as the title suggests -- are elected members of the Wet’suwet’en Community.

These councils were the result of the Indian Act, which was first established in 1876 and defined how the Canadian government interacts with Indigenous people. They were formed to impose a leadership structure that more resembled Canada’s system of governance.

National Chief Perry Bellegarde of the Assembly of First Nations believes it’s best if the Wet'suwet'en people are left to resolve their differences on their own.

“What we’ve got to encourage right now, to resolve this, is to make sure the Wet'suwet'en peoples themselves get together,” he said. “Get together into their long houses, their big houses, and have the feasts and the ceremonies and have their laws and traditions govern how this is resolved.”

BC Premier Horgan agreed with Bellegarde that the most effective approach might be to just let the Wet’suwet’en work it out amongst themselves.

“I’ve heard them say it repeatedly that: ‘We need to come together as Wet’suwet’en people to figure that out,’” he said. 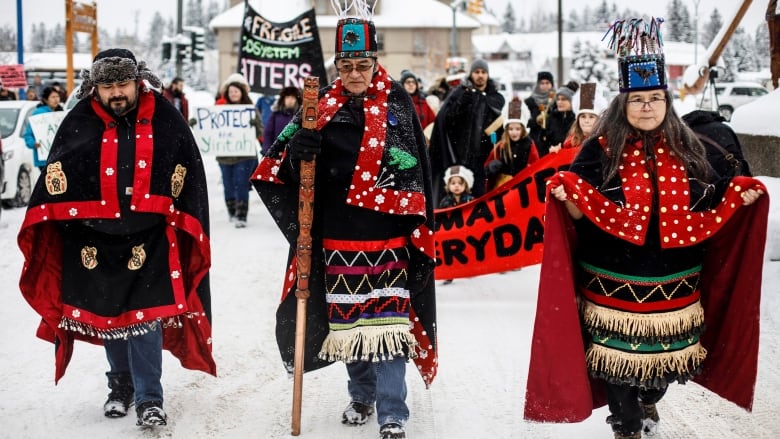