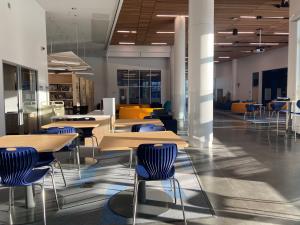 The new school features modernized, flexible learning spaces for French First Language secondary students, including a gymnasium and other spaces for learning and community use.

"This is a major milestone for Yukon’s Francophone community and a testament to the renewed partnership between the Yukon government and the Commission scolaire francophone du Yukon. This beautiful new building in Riverdale will contribute to the campus model where communities and cultures can gather, learn and play in a variety of facilities. We look forward to seeing students and community groups benefit from these modern learning and community spaces." Minister of Education Tracy-Anne McPhee

"CSSC Mercier is a great example of our government’s new value-driven procurement process. It creates opportunities for local businesses and improves government spending in the territory. We thank the local contractors for their expertise and work on this fantastic new facility and commend them for completing it ahead of schedule." Minister of Highways and Public Works Richard Mostyn

"The entry of our students into CSSC Mercier is a historic and exciting moment for the entire Francophone community and for French First Language education programs in the Yukon. The opening of CSSC Mercier demonstrates the respect accorded by the territorial government to our language rights and the provision of an equivalent infrastructure to our students. We thank the Government of Yukon for its commitment and contribution to building CSSC Mercier." Commission scolaire francophone du Yukon President Jean-Sébastien Blais

The name of the school and community centre was officially chosen on May 15 2020. The name was proposed by Vincent Bélanger as part of a competition launched by the Commission scolaire francophone du Yukon (CSFY) with the Francophone community.

Centre scolaire secondaire communautaire Paul-Émile Mercier (CSSC Mercier) is one significant outcome as a result of agreements between the Government of Yukon and the Commission scolaire francophone du Yukon through a joint settlement committee to resolve issues from the 2009 lawsuit.

The Government of Yukon and the Commission scolaire francophone du Yukon have reached an agreement to ensure the three schools on the Riverdale campus work collaboratively to optimize the use of facilities.