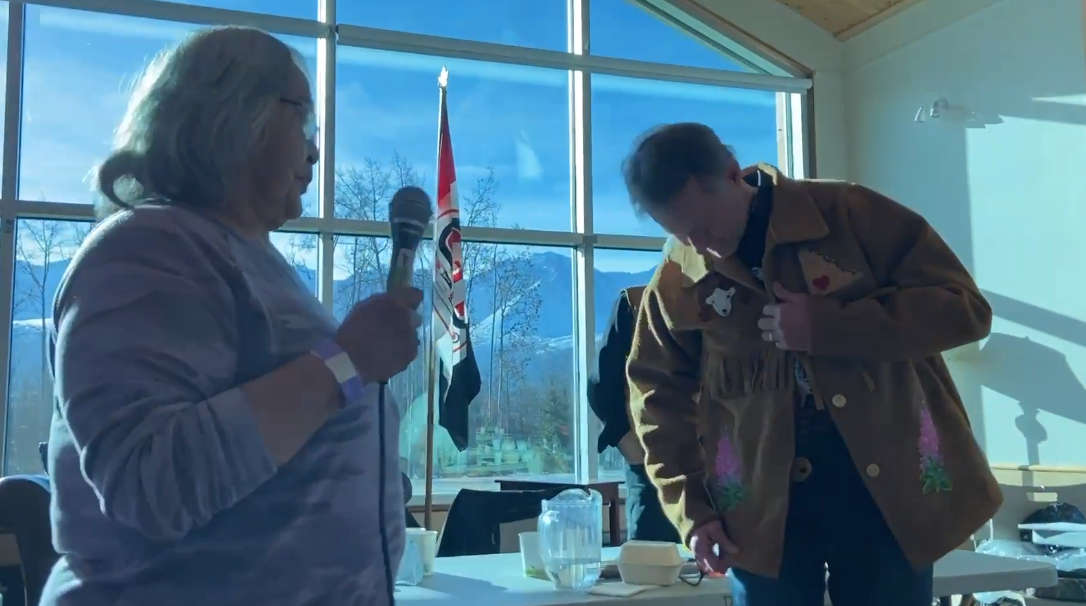 The jacket was also a teaching moment for CAFN Community Wellness staff.

“There were a lot of meetings with this gentleman to my right,” said Chief Steve Smith of Champagne and Aishihik First Nations speaking at their General Assembly on Sunday. The gentleman he is talking about is the territory’s new Member of Parliament Dr. Brendan Hanley.

CAFN presented Hanley with a beaded moose skin jacket to honour is his work throughout the COVID-19 pandemic as the Yukon’s Chief Medical Officer of Health.

“Even though he has no ties to Champagne and Aishihik whatsoever, he did a lot of work that kept our people safe,” said Chief Smith. “We still pray everyday that nobody gets taken by this crazy sickness,” he added.

The tan-coloured tasseled jacket was created by Elder Barb Hume who used it as an opportunity to teach other CAFN Community Wellness staff how to sew. The garment features a ram’s head on the right side of the chest beaded by Brenda Lee Asp and the outline of the Yukon with a heart inside on the left that was done by Dorothy John. The lower front is made colourful by a fireweed on each side thanks to Darline Blair. The back depicts the Yukon crest on the upper half, a collaborative effort by Liz Jim, Dorothy Moose, and Joyce Hume. Two more fireweeds by Joyce Hum and blue flowers beaded by Nicole Nicholas-Workman adorn the lower section.

The jacket closes up with bone buttons made by Chuck Hume. Sizing and support were done by Marion Primozic and Richard Smith from CAFN Cultural Centre programs provided the moose hide.

Dr. Hanley says getting the gift was one of the best moments of his career.

“This is the greatest honour I have received in 25 years in the Yukon,” Hanley remarked after putting on the coat.

At the GA, CAFN Council also commended all CAFN Citizens and staff for their strong response to support each other during the COVID-19 pandemic.